My dramatic relationship with the weather would not be over yet but for this day at least I would have a reprieve. With most my gear drying out in the hostel I took the advantage to create a circular loop of the mountain summits of the Glendalough skyline. With seven mountain summits over a distance of 29km this would be a good catch up on time lost in the Tonalagee struggle. It also meant I could travel light and do some real running in these hills. The mountain weather forecast I had been following seemed to be remarkably accurate at predicting weather once it had passed but a little more vague when it came to future weather forecasting. In fact it seemed to be updated several times a day to reflect what the weather was actually doing rather than accurately providing any kind of advance ‘heads-up’. If the weather forecast for ‘tomorrow’ didn’t transpire it would be reforecast for the following ‘tomorrow’. By this point the best thing seemed to be just to look at the sky and generally expect to get wet at some point. 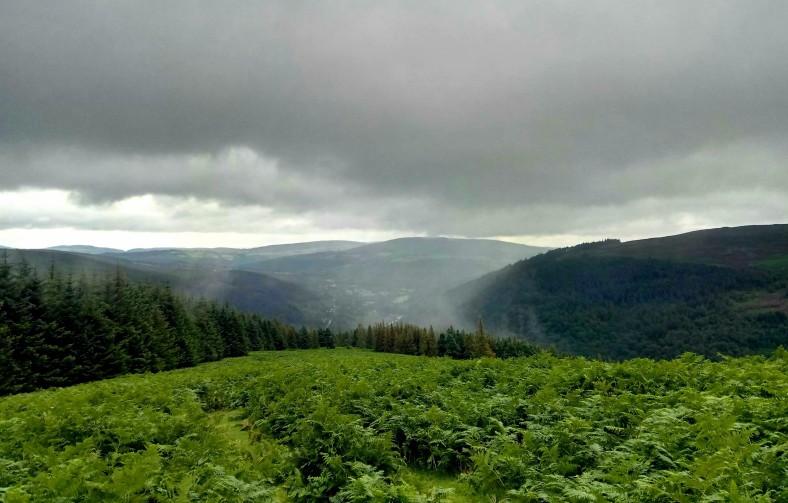 Today looked like a mix of sun, cloud and heavy showers which was a massive improvement on the story so far and after a moody start it turned out to be a great circuit, with only the section in the middle full of the peat hag assault courses I was becoming accustomed to. With wonderful views of the sea, coastline and valley below it seemed a shame only to see two other people in the mountains all day. When I joined the Wicklow Way back down to Glendalough and reached the valley floor with its jaw dropping views however, I discovered that’s where EVERYBODY was.

This stunning glacial ‘Valley of the Two Lakes’ is very famous and extremely popular with an estimated one million visitors a year to the valley and particularly busy on an August Sunday afternoon. The contrast between the solitude of the hills and the bustling crowds in the valley was entirely overwhelming and several smartly dressed, camera toting visitors tip-toeing along the edge of the lake gave me quite a wide berth as I ran down the hill soaked with sweat and walked straight into the cooling waters of the lake with my shoes still on! “Clearly a madwomen” they were probably thinking. It’s true that the more time I spend outdoors in all the elements the more, almost feral I become. Usual inhibitions seem to fall away as I become relaxed and at home in my outdoor surroundings and I sometimes have to remind myself that things I might do in the mountains are just not socially acceptable when strolling around Tesco!

After a more than arguably generous day yesterday, todays skies promised much the same – a bit of sun, a lot of cloud and those ever present highly localised furious downpours. At least you could see them coming from the mountain ridge and be prepared for impact! After losing so much time with the river crossing shenanigans I would have to cut out four outlying mountains in order to complete my Wicklow Round in the time remaining. Frustrating, but it meant it would possible to complete the route with three big days over 15 mountains. And the mountains would still be there another time! Today included Lugnaquilla, the highest mountain in Ireland outside of Kerry and yet the straightforward grassy plateau made this possibly the easiest summit to reach during my whole time in the Wicklow Mountains despite the nasty weather that hit as I was heading up.

Lugnaquilla provided an easy and gentle summit despite looking uninviting from below!

After another seven summit day over 29km with 1500m of elevation I crossed a stream – easy enough on this occasion and found a decent camping spot sheltered though still fairly waterlogged. However, I was a bit torn because close by in the valley bottom was Glenmalure Hostel, a simple mountain lodge described as ‘basic’ on account of having no running water, electricity or indoor plumbing of the toilet variety. It was really a cosy bothy where evenings would be spent in candlelit conversation around a roaring log fire and was quite famed for a warm welcome and its idyllic location…oh, and of course, its resident ghost, ‘Scary Mary’ who apparently is a kleptomaniac for cosmetic accessories!?

The welcoming cosy hearth of the Glenmalure Hostel…..and no sign of ‘Scary Mary’

The valley has seen many battles over the centuries and some of the trails are said to be haunted by marching ghosts of deceased soldiers. Despite the spooky stories I felt it would be a shame to miss out on visiting this legendary place. It was just 4km down into the valley although that would mean a 4km climb back up in the morning, but it seemed well worth it and I could hang up my wet things again overnight. 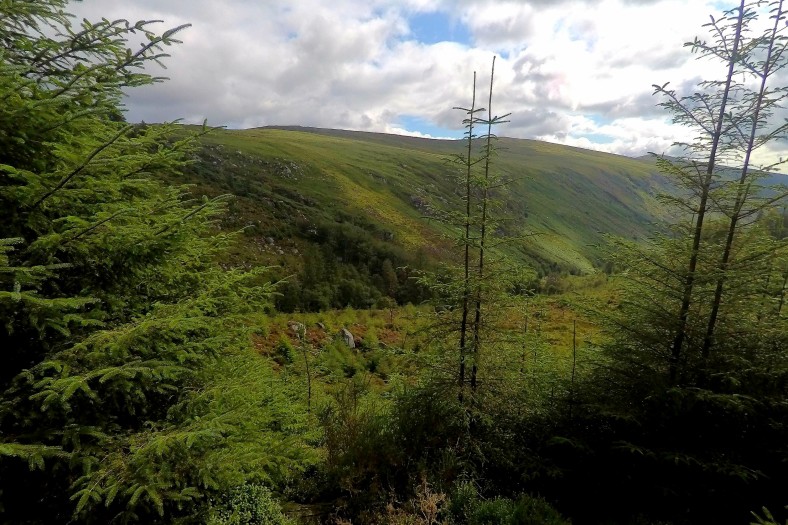 Down into the peaceful Glenmalure valley

I arrived just in time for dinner which was a very unexpected and welcome surprise. The hostel is cared for by volunteer wardens and as well as a wonderful welcome they prepare delicious hot meals. It was a great evening as we put the world to rights over a glass of wine or two by the fire as the river raged by outside the window. During the previous rough spell of weather the track over the river here had been impassable too and they had been unable to get out for a couple of days. Seemed the storm had caught many people out. Not a bad place to be ‘trapped’ though. After a hearty meal, great conversation, feet warmed in front of the fire and that glass of wine I had the best sleep of this whole adventure!